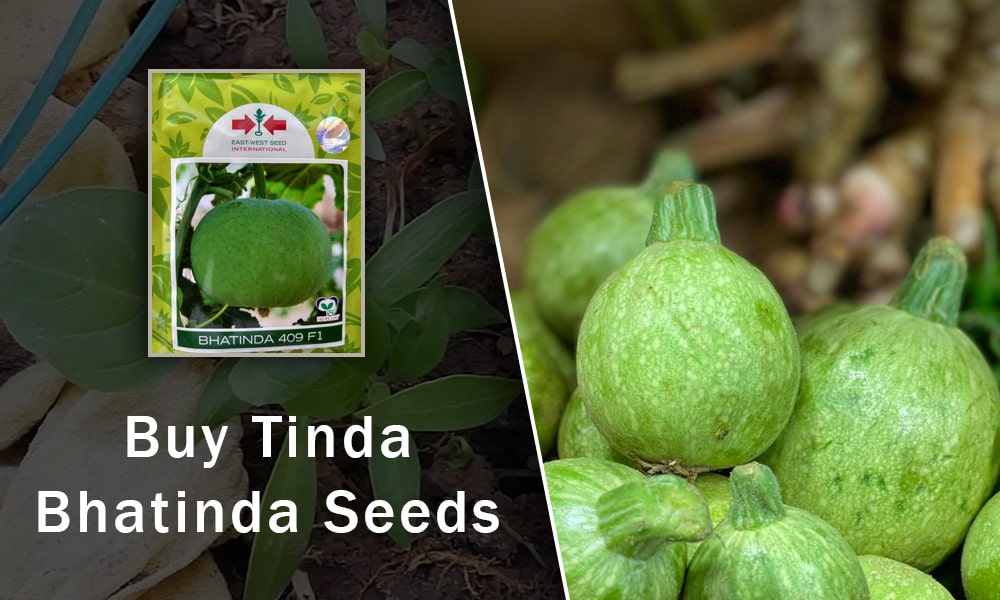 Commonly known as Tinda, this vegetable has few other names which are Indian squash, apple gourd, round gourd, crown gourd, and Indian baby pumpkin. For Indians, it is one of the most widely available vegetables throughout the year.

Since it is consumed on a large scale, every farmer can make huge profits by growing this vegetable. By using Tinda Bhatinda Seeds, anyone can grow high-quality round gourd in their humble garden or a big field for commercial farming.

The very first fact about growing Tinda you should remember is that it takes very little space. It is predominantly cultivated in India with the height of vines reaching 1-2 meters. It is very popular in some other nations of South Asia and becomes one of the primary ingredients in the kitchen.

With some flavorful spices, this vegetable tastes delicious and it can be cooked in different ways too. In the initial stage, tinda has some frizzies on its skin and branches as well. It belongs to the gourd family and can be found in various sizes too.

In India, Uttar Pradesh and Punjab are the two states where it is grown dominantly. If you talk about its nutritional value then Tinda is rich in Vitamin A. It also becomes one of the vegetables that can be grown very quickly and make farming very versatile for peasants.

Arka Tinda- This particular variety grows very quickly within the period of 45 to 50 days after sowing. Once the pollination is done, it is ready for pollination in 5 days. Like many other varieties, it has hair on its skin and is light green in texture.

Bikaner Green- The distinct attribute of this variety is its size and also, its ripening time which takes place just after 60 days of sowing.

Punjab Tinda- In the context of size, it is medium-sized and has a glistening appearance. While eating, you realize that the seeds are lesser than the other variety and the flesh is totally white. It has an impressive yield that is 8 to 10 fruits and if all the plants are properly nourished, you can get 4.5 tonnes per hectare in just 2 months.

Anamalai Tinda- As the name suggests, this variety of Tinda was developed in the southern part of the country. The smallness of size and light green texture is its chief differentiators.

Mahyco Tinda- If you are into farming then you’ve probably heard this name. Mahyco is a private company that has developed this variety.

Swati- This one is a hybrid variety with dark green colour. It can be harvested just after 2 months of sowing and its vines could attain a height of 175 to 225cm.

Get The Preferred Environment For Tinda

The first thing that you need to keep in mind is the variety of soil. Sandy loam is considered to be very beneficial because of its high pH level of 6.5 to 7.5. It is rich in organic matter and provides a good amount of moisture as well.

It is also highly suitable for the development of the Tinda roots while requiring reasonable precipitation of water. To give the proper nutrition to the seeds, you need to choose a spot that receives a decent quantum of sunshine.

Another fact that you need to keep in mind is that it can be grown in large containers as well. They need to have at least a diameter of 40cm and must be furnished with many draining holes at the bottom.

Keeping The Right Temperature As Well

You can get perfect tinda when the temperature is hot. You can plant them between January and February if you live in the plains. However, if you are living in the hills, the best way to grow is to do it inside your home. Once the cold season is over, you can keep them outside.

For germination, the right temperature window is between 25 to 35 degrees Celsius.

Keep The Space Accurate Between Seeds

In farming terminology, you need to maintain the bed width of 1.5 meters while sowing the seeds at both sides of the bed. Before planting them, it is recommended to soak the seeds for 12 hours and to keep the distance of 18inches between them.

If you are growing them in a straight queue, then keep a distance of 48 inches to 70 inches. Assuming that you will be placing the seeds on the sides of the bed, it is advised to keep the width of the bed 1.5m and the spacing between them should be 45cm.

To get the best results in Tinda farming, get Tinda Bhatinda seeds from Farmkey and make your farming a super success.

Place your order now and get a great offer!